May 5, 2022
By Melissa Leavitt and Holly Custard 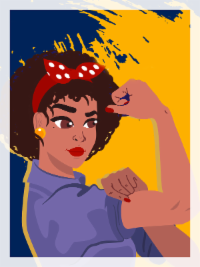 Every year when stores fill with Mother’s Day gifts and cards, I’m reminded of my mother’s “Supermom” coffee mug from the 80s. It depicted a woman with multiple arms, each one busy with a different task: one arm punched numbers on a calculator, another held a baby, another stirred a pot, and so on. Even though it was a cliché, I remember feeling amazed by all the abilities it represented, but daunted by the expectations it set.

During Women’s History Month in March, Holly Custard and I celebrated by reflecting on stories of exceptional women — leaders and history makers whose accomplishments have changed our world for the better. As we did, though, I found myself thinking that it sometimes feels like society requires women to be exceptional in order to be valued. Women shouldn’t have to be exceptional in order to build the lives we want for ourselves. And mothers shouldn’t need to be superheroes to make it through a day. But too often, overcoming the challenges women encounter — challenges of expectations, of circumstances, of opportunity — demands superhuman qualities of resilience and strength.

For many women today, building the life they want means adding one more task to their already full lives: education. Even before the pandemic, technological advances and other economic changes made ongoing training and education essential to finding meaningful work. As we ride out the upheaval in our post-pandemic labor market, education is more critical than ever.

For the past few years, workers and employers alike have consistently signaled the importance of learning new skills. In a 2019 survey of employers published by the Society for Human Resources Management, 75 percent of respondents who said they had difficulty recruiting attributed those struggles to a skills shortage. Last year, findings from a study of the National Federation of Independent Business indicated that not much had changed; more than half of business owners reported having difficulties in finding qualified job applicants.

For many women seeking work, enrolling in education to learn new skills is a priority. Starting in March 2020, Strada Education Network’s Public Viewpoint surveys asked people all across the country how the pandemic had impacted their education and work. Almost a third of women surveyed said that if they were to lose a job, they believed that they would need more education to replace it.

The same surveys asked what might make it challenging to pursue education. More than 40 percent of women said that balancing school and childcare would be at least somewhat difficult, and almost 60 percent said the same about balancing school and work. Although these were not the biggest challenges that women anticipated — concerns about costs were #1 — they reflect the difficulty of juggling education along with life’s many other commitments.

Women were not alone in these worries. In fact, the percentages of men concerned about balancing education with work and child care were slightly higher than those of women who reported these concerns. Maybe that’s because so many women are already proficient at weaving learning into life.

In 2019, Holly conducted a series of interviews with adults who were striving to make progress in their lives and careers. Many of the women she spoke with told compelling stories about what it took to balance education with child care, work, and other responsibilities.

Rosalinda recounted a day in her life as a working learner, which included dropping her children off at school, traveling to the neighborhood where she cleaned houses, getting to campus in time to record a lecture, and listening to that lecture late at night while she sewed wedding dresses at the dinner table.

Nicole’s journey to finishing her education was one of overcoming self-doubt and recognizing and celebrating her own value. Her commitment to herself meant setting boundaries and carving out time for school — a commitment, she explained, that came second only to the health of her family.

For Becky, work was what made school possible, but it also became a barrier to pursuing her career goals. She talked about getting the opportunity to move into a new role at work, thanks to an employer-funded training opportunity. But when her manager changed, Becky had to take on other responsibilities, putting that next rung on the ladder just out of reach.

All of these women describe the astounding efforts they made to pursue their goals, while at the same time caring for their families and juggling many other responsibilities. But when we watched these interviews, what struck us as most remarkable was the matter-of-fact way in which these women told their stories. They are all exceptional women. But for them, and so many other women like them, being exceptional is simply a fact of life.

As our recovery from the pandemic continues, and more women pursue the education they need for the life they want, they can benefit from programs and resources that make this balancing act easier.

Let’s continue to celebrate the accomplishments of exceptional women all year long, and not just for Mother’s Day or Women’s History Month. But let’s also work to support women like Rosalinda, Nicole, and Becky, and remove the hurdles they face — so that completing an education program and pursuing your dreams becomes the rule, not the exception.